Japanese singer/rapper SKY-HI has announced his very first world tour “SKY-HI Round A Ground 2017” visiting more than 20 venues around the world.

The tour will kick off in Japan on October 11, followed by shows in Taipei, Hong Kong, Los Angeles, New York, Paris and London.

Starting his career in 2005 as a member of the idol group AAA, Mitsuhiro Hidaka simultaneously launched his solo career under the name, SKY-HI. He roamed around the club scene of Tokyo, participating in rap battles undercover from his pop career.

In 2012, SKY-HI launched the critically acclaimed “FLOATIN’LAB” project, where he collaborated with other artists, releasing a CD in response to the success. SKI-HI was awarded the “WOOFI’N AWARD 2012” for BEST RAPPER, for his musical collaborations with artists such as KREVA, and multi-city tour across Japan.

In 2013, SKY-HI made his major debut, and in March of the following year, released his first album “TRICKSTER”. In the same year, he won MTV’s “VMAJ 2014 BEST HIP HOP VIDEO”. His skills and refined musical tastes have transcended genres and has now claimed attention from the rock and “subculture” scenes.

In 2015, SKI-HI has accomplished a nine-city, nine-show country-wide tour called “Ride My Limo” in which more than 10,000 people have attended. In response to the high demand, three additional shows were hosted at the famous ZEPP halls. For these shows, SKY-HI himself produced the band’s sounds, staging, and lighting, integrating a live-band, and a group of dancers he calls SUPER FLYERS. From this tour, big bands have become a symbol in SKY-HI’s solo tours.

In January of 2016, his second album, “CATHARSIS” was released. The album showcased SKY-HI’s eccentric musical tastes and his story-telling ability as a lyricist.

From the following month, he completed his first seven-city, cross-nation music-hall tour, called “SKY-HI HALL TOUR 2016 Find Ms. Liberty”. A choir accompanied his performance, resulting the tour in a sold-out success. This tour gained SKY-HI industry-wide recognition for his unique entertainment style and contributed to his appearances at multiple large-scale music festivals. Since 2016, he has been touring around smaller venues in his LIVE HOUSE TOUR, sharing the stage with other artists under the name, Round a Ground.

SKY-HI’s 3rd solo album, OLIVE was released in January, 2017. This album transcended SKY-HI’s name as a singer-songwriter outside of the music industry. In March of the same year, a 13-city, 15-show “SKY-HI HALL TOUR 2017 WELIVE” tour was announced, where he played two shows at the celebrated Budokan venue. 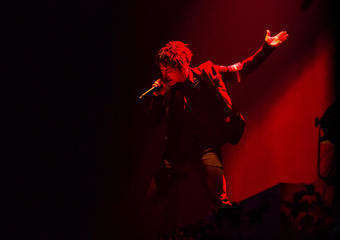